A germ of an idea

In 2001, David (my composer husband) brought home a book – Cleopatra Goddess/Queen by Kristin Zambucka.  I thought no...Cleopatra has already been done scads of times.  I’m not interested. 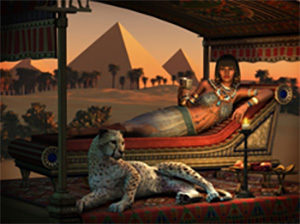 As I am an avid reader, several months later, I read the book.  But nothing jumped out that I thought could be turned into a story until I reached the part about her last days.  There, I found the possibility of gold.  This time, I felt the material was suited to a sung through opera rather than a musical as we had written in the past.   I suggested the opera idea to David.

This time, he was the one who baulked.  With a little persistence on my part, he agreed to at least try it.  Once he got started, he loved it.

I do better writing when I know a work will probably get on a stage so, I pitched the idea to a small opera company in St. Petersburg/Clearwater I had been singing with.  The artistic director liked the project and ok’d producing it the following year.  Thrilled, David and I got to work.  Then, for some reason – unknown to us - the artistic director changed his mind.   Well!!! The president of the board, Claudia Johnson, was not happy with this surprise turn of events.  She was determined our opera should be produced and promised to help us.  She resigned from the board.  With Claudia’s help, we started Skyway Productions (501c3) as we wrote and wrote and wrote. 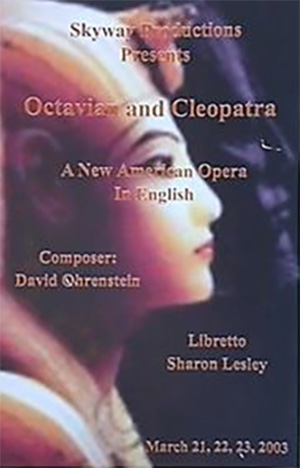 Octavian &Cleopatra was scheduled to premiere at the Palladium in St. Petersburg in March 2003.   We were on our way with a good draft of the opera, a great cast of seven....but we needed a place to rehearse larger than our living room.  Our mezzo in the role of Charmian, Gisella Monclova, and her husband, had just purchased a large house.  It was in the midst of renovations with large open spaces.  She let rehearse there.  Every rehearsal was an adventure.  We found ourselves singing amidst some sawdust, see-through walls and even on her pool deck overlooking a golf course.  We all wondered what the golfers were thinking as our large operatic voices carried across the fairways.

Octavian & Cleopatra opened 3/21 with sets, costumes, lighting and piano accompaniment...the same day President Bush sent troops to invade Iraq.  It was not a good time for many shows.  We were encouraged by our smallish but appreciative audience.  The feedback from opera lovers and non-lovers was truly positive but mostly about how they loved it sung in understandable English.

Naturally, we wanted to get it back on its feet ASAP.  Fortunately for us, a date opened up for two performances on February 14, 2005 in the Special Event Series at The Players of Sarasota.  Back into rehearsal we went, made some changes, and low and behold another bit of drama.  The day before the performances my stomach began to churn.  I figured it was just nerves, since I was singing Cleopatra.  The next day,  I felt decent and got through the matinee.  Then, I hit the skids.  I went home and went to bed.  We had no understudies. Somehow, literally with David’s help, I dragged myself out of bed for the evening performance.  I arrived after half hour call, arranged for others to take some high notes, drank some Red Bull and went on.  All who saw both shows said my night performance was better than the matinee.  How that happened, I’ll never know.   The next night, I ended up in the emergency room and it took five days to recover.

You’d think, we might have viewed the above as a sign.  But what show was born without some pain?  Over the next few years, Octavian & Cleopatra had a hard time getting any traction.  When submitted for consideration at various venues in different parts of the country, it was considered “too Broadway” by opera companies and “too operatic” by theater companies.  Then the great recession hit.  Our opera sat on a shelf while we scrambled to make a living.

Several years later, David had the bright idea...why don’t we put together a new work that features all the ladies we had written about?  Each had ruled their countries.  How about we condense what we had done to 30 minutes each and call it “Three Queens”?  (though technically – and I’m the literalist – not one was a queen.)  “Three Queens” would be about Elizaveta – Empress of all Russias, Golda Meir – Prime Minister of Israel,  and Cleopatra – Pharaoh of Egypt.  He thought our new work could also be a good promotion tool for each of our longer works.  I thought... OK.  Why not? 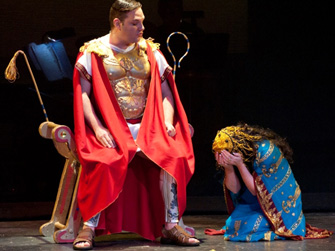 Back to the drawing board, I went.  How to condense so much material in three full length works was a challenge.  We

for a man and a woman.   At this time, David and I were working at Scott’s Oquaga Lakehouse located in the southern tier of upstate New York.  We had performed our act and David was the house pianist for five previous summer seasons in the 1980s and 90s.  Some fabulous women who lived around Oquaga Lake offered to help us.  So, THREE QUEENS was performed on Aug.29, 2009 on the Playhouse at Scott's. (In 2018, the award winning The Marvelous Mrs. Maisel was filmed at Scott’s)

Then, back in Sarasota, with more rewriting and added orchestrations, THREE QUEENS was performed on May 14, 2011 at The Players with a three person cast. (1 man, 2 women).  This time our production included projections and an ensemble of six musicians.  But, as we worked to get this piece out into the world, more rejections followed.  Again, Cleopatra sat on a shelf.

The saying may go...” if, at first, you don’t succeed, try, try, again.”  Well...we did that, so phooey on that saying!   Instead, we followed what baseball great Yogi Beara said, “When you come to a fork in the road, take the fork.”

I tried my hand at more orchestrating and learned a lot.  I was mentored by numerous professional ballroom dancers who taught at Scotts.   I experimented with sounds and rhythms.  The result was a CD of David’s original compositions with my computer generated orchestrations called Dancing Near You.  Then, we had two world premieres of pieces written for concert band.   And we took jobs that featured each of us solo.  I rewrote the Golda story, turned it into Golden Roads and opened the 2017 SaraSolo Festival in a one woman musical. (David played the piano.)

One day in March 2017, after teaching a Road Scholar group about opera, a man named Kemp Smith introduced himself.  (For more about Road Scholar see below)  He was on the board of directors of 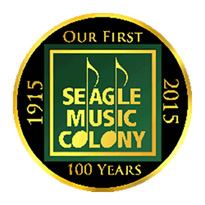 Seagle Music Colony (SMC).  Since SMC produces and workshops new works, he suggested I submit our opera.  At first, I resisted.  I didn’t think I had the heart to hear another rejection.  But, since Seagle’s summer music season incudes both Broadway and operatic classics, I felt our work might find friendly ears. Still I did nothing.  A year went by.  Then I got an email from Kemp about SMC’s American Center For New Woks Development.  With trepidation, I sent a letter of inquiry and spoke with artistic director Darren

Now it was “try, try, again”, but this time the piece had to be different.

I took the reins and began a major rewrite in April 2018.   Inspired by CARMEN, I turned our former tragic opera into an opera comique by giving it a lighter touch.  I cut two characters and multiple numbers. Then more comedy, dance rhythms, different numbers, some spoken dialogue were added and we fleshed out the piano-vocal score.  And I really wanted to showcase the singer, so I gave each role at least one stand out number and .... other moments where the voice/voices shine alone without accompaniment.  Even though Cleopatra dies, the motivation behind her death was changed.  Newly retitled PATRA, the opera ends on an upbeat note when Cleopatra’s love changes Octavian from villainous to heroic.

In July, David and I tr

aveled to Seagle Music Colony.   It was fabulous to be surrounded by the many great young singers and other artists and see their work.  We met with Darren Woods about PATRA.  Fondly nicknamed the grandfather of new American works, Woods has a passion for encouraging and developing the works of living composers.  We told him about the story and played six demo recordings. Woods liked what he heard and that our songs were operatic but had a Broadway influence.  He encouraged us to continue.  I submitted the first act of the libretto.  In October, Woods announced PATRA was accepted.

We were thrilled and honored.  We worked madly over the next months to finish our opera comique.  A rehearsal-ready piano vocal score was completed and sent off in early March 2019.  PATRA will be workshopped Sept 1 – 7 with the American Center for New Works Development at the Seagle Music Colony

Since 2000, I have been an instructor with Road Scholar.  Previously known as Elderhostel, the adult learning organization spans the globe with all kinds of programs geared to those over the age of 50.   I teach the theater and opera groups that journey to Sarasota from across the US and Canada to see performances at the Asolo Repertory Company and the Sarasota Opera.  As much as they have learned from me, I have learned from them.  Finding out what an audience thinks and what they respond to best about each performance, has influenced my writing.  After all, there is no theater without an audience.